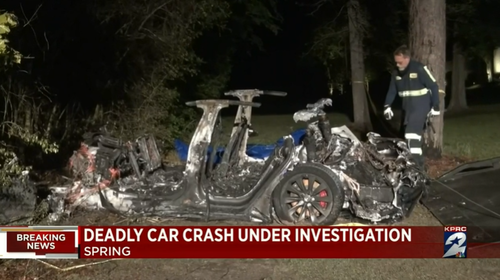 Senator Brian Kelsey sponsored special interest legislation on behalf of Google in 2015 that prohibits any county or local governmental body from regulating driverless robot cars. Here is the latest example of many Tesla crashes where nobody was behind the wheel except the  “autonomous vehicle technology”.  Maybe it will take one of these robot car crashes occurring on his cul-de-sac or killing a friend or family member for the reality to hit home. Elon Musk doesn’t have anything to worry about in Tennessee. The Republican super-majority has already taken care of it.

While the NHTSA continues to sit idly by and allow Tesla to continue to beta test its “Autopilot” and “Full Self Driving” features on public roads, yet another two men are dead after a Tesla crash where no one was reported to have been in the driver’s seat at the time.

The Tesla slammed into a tree near Hammock Dunes Place in the Houston Area, a local NBC affiliate reported. The wreck was in the “Carlton Woods subdivision near the Woodlands,” the report says.

According to authorities, “the vehicle failed to negotiate a cul-de-sac turn, ran off the road and hit the tree.”

NBC says it is “trying to determine whether the vehicle may have been in automatic driving mode due to the victims’ seating, but that information is not available yet.”

While we will also wait for further information before passing judgement, it would see to echo an influx of videos and Instagram posts showing Tesla owners sitting in various parts of their vehicles – anywhere but the drivers’ seat – while the car barrels forward in Autopilot or FSD mode.

And stop us if you’ve heard this one before: A reported 23,000 gallons of water needed to be used to extinguish the flames because the Tesla’s battery “kept reigniting”.

Meanwhile we continue to hear nary a word from the NHTSA regarding the potential (mis)use of Tesla’s Autopilot features. Perhaps when the family member of someone close to the agency, or congress, is involved, the agency will change its tune. Until then, they show no signs of being sweet on Elon Musk and letting him continue to beta test whatever features he likes on normal roads.”